Having been a member of this forum for the last 7 years, I've been on a bit of a hiatus as I sold the red Twingo 133 I bought in 2014, and haven't had one since until December last year!

Having graduated into bigger cars, an M2, and M3, a Golf GTi and now a GR Yaris, eventually my younger brother had to get a car to replace his struggling 1st VW Polo. Having fond memories of my old red Twingo 133 Cup, I announced I'd go halves with him if he bought one - as an 18-y/o liking the idea of a half-price Renault Sport car, we got hunting and found this beautiful Silverstone GP Edition car.

The previous owner used it as her weekend runabout and has fitted Pagid pads, but besides that it remains standard. We were very lucky to find this car is actually No.1 of the 50 cars built, and have a copy the magazine it was featured in, I don't have it with me but I think it's a Top Gear or EVO mag.

At long last I'm back in a Twingo RS and enjoying it, I live in London now so it's a perfect runabout when I don't want to risk taking the GR Yaris. The Renault is still terrible over bumps, I'd forgotten how bad, but I like how simple it is and how few beeps and bongs there are compared to the more modern Yaris. It only cost £220 to get all 4x tiny 17" wheels resprayed too!

Now the previously horrendous-looking alloys have been returned to their former glory, all the car needs is an A/C re-gas that I'll attempt myself and she'll be perfect. Long term I might change the tyres, I remember Continental Sport Contact 3 being good on my last Twingo RS in 2014, likewise Ferodo DS2500 pads and possible a set of Bilstein B16 springs&dampers - does anyone have experience of them? 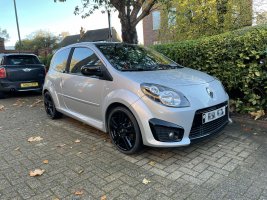 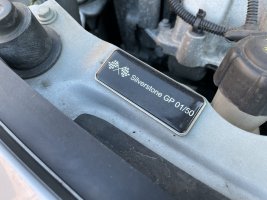 Looks Really nice , I’m loving mine great little cars , glad I went for the twingo now and not another RS Clio

Bolts1323 said:
Looks Really nice , I’m loving mine great little cars , glad I went for the twingo now and not another RS Clio
Click to expand...

Hello and welcome. Nice car too, thanks for joining.
O

Great find getting No.1!! Cracking cars these, I've just picked a white 'cup packed' 133 up, loving it! I didn't realise they put a numbered 'plaque' under the bonnet, thought it was just on the center console below the gear lever....?
Share:
Facebook Twitter Reddit Pinterest Tumblr WhatsApp Email Share Link
Top